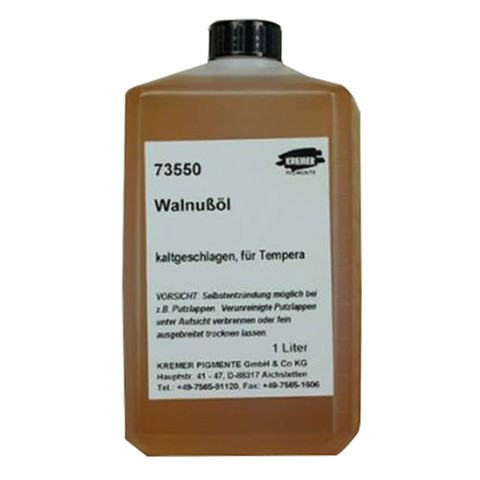 Cold-pressed walnut oil is filtered with no additional treatment. It yellows less than linseed oil. It is closer in drying time to poppy oil than linseed, but dries faster than the former. Its viscosity is lower than that of linseed, and it can generally incorporate more pigment as a binder. The chemist Tingry noted in the mid 19th century that nut oil is more weather and UV resistant than linseed oil, despite forming a somewhat softer paint film.

Walnut oil is pale coloured and dries to provide a very glossy paint film. A thin coat of paint made with Cold Pressed Walnut Oil dries in 7-14 days. Often used for the preparation of whites, pale blue and yellow pigments, where delicate colours may be affected by the stronger yellow colour of linseed oils. Cold Pressed Walnut Oil can also be used in conjunction with egg yolk to make an egg-oil emulsion paint which can be thinned with water (i.e. add 40% Walnut Oil to 60% Egg Yolk, stir together slowly and evenly to form an emulsion).

Walnut oil has a shorter shelf life than other oils and can spoil.